WILL PARRISH reported a few weeks back on the case of Ramiro Hernandez Farias, a Ukiah resident originally from the southwestern state of Michoacan, Mexico, who has been living without papers here in Gringolandia for more than seven years. Farias was arrested by Immigrations and Customs Enforcement (ICE) during Operation Full Court Press, the much-ballyhooed sweep of public lands executed this past August by a phalanx of local, state, and federal marijuana eradicators. Farias has lan­guished in Yuba County without charges for more than seven months, but he had nothing to do with marijuana cultivation. He was merely hanging out with his family on Cow Mountain, the BLM-sponsored recreation area east of Ukiah, at the time he was swept up by the feds. Farias' family originally came to Gringolandia to escape persecution by one of Mexico's ultra-violent drug cartels, La Familia, which had offed his father-in-law and tortured his uncle, an outgrowth off the cartel's efforts to take over new turf. With help from his Santa Rosa-based attorney, Richard Coshnear, he is seeking to gain asylum status under the international torture convention, of which the US is a signatory, which would allow him to remain in the US and thereby avoid his own horrible fate at that hands of the cartel. Farias appeared before a San Francisco immigration judge on Valentine's Day, February 14th. After three hours of testimony, the judge was unable to render an immediate decision on his fate. He continued the case until April 9th, the next time he has an opening on his calendar (such is the volume of cases at the SF immigration court during the Obama era.) Farias is not alone in having been rounded up during Full Court Press, despite having no demonstrable ties to the marijuana cultivation industry. The question arises: To what degree was the combined federal-local cam­paign to squelch marijuana growing on public lands merely a pretext the federal immigration cops exploited in order to round up local undocumented people, in the process shattering their families, and in some cases — like that of Farias — endangering their lives. There are several cases similar to that of Farias. Will had originally planned to feature a follow-up on the Farias case a few weeks ago, but it's taken him longer than he expected to wrap up his full investigation of who was arrested during Operation Full Court Press, and under what circum­stances. He plans to complete that follow-up piece in time for next week's issue. 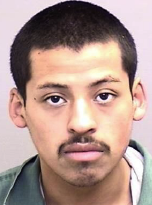 FLIP OUT OF THE WEEK honors go to Gilberto Olea-Vargas, 20, of Ukiah. On Monday night about 9, deputies from the Mendocino County Sheriff's Office were dispatched to 2075 N. State St. in Ukiah “regarding a male subject vandalizing the residence and possibly under the influence of drugs. When deputies arrived, they were directed to a male subject standing in the street without his shirt on. He was covered with a white ash type powder, talking to himself and occasionally laughing out loud. Family members informed deputies that Gilberto had been ingesting the designer drug ‘Bath Salts’ for the past three days and he was acting violent towards them. Family members stated that Gilberto had vandalized a cast iron stove that was attached to a wall in the residence, that's why he was covered in ash. Gilberto had also taken a large metal pipe and vandalized a truck that belonged to his father. Gilberto was incoherent, and then very aggressive but was restrained by deputies, put in handcuffs and arrested for public intoxication and felony vandalism and taken to Ukiah Valley Medical Center for clearance and being under the influence of Bath Salts. At the hospital, Gilberto would become very aggressive and try to break his handcuffs, he would then calm down and again become aggressive. Gilberto was later transported and booked into the Mendocino County Jail for the listed charges and his bail set at $15,000.”

THIS COULD BE GOOD NEWS for Mendocino County's burgeoning home-based enterprises. Assemblyman Mike Gatto, D-Los Angeles, has introduced a bill that would allow home-based chefs to sell their wares without a lot of the red tape that presently discourages small enterprise. AB1616 would permit people to market "nonhazardous" baked goods, granola, popcorn, chocolate-covered nonperishables, roasted coffee, jams and honey. Gatto says his law is similar to that existing in some 30 other states.ONE WONDERS that no one on the South Coast has applied for this attractive, nearly full-time job driving the Tribal Head Start bus. $18.21 an hour, 35 hours a week plus fringes. The driver also usually helps out in the class room when they aren't driving or taking care of the bus." If interested, please contact Leah Hawkins at 916-929-9761 ext. 1701 or e-mail her at Leah.Hawkins@crihb.net

MY VOICE was getting louder and louder

And I seemed to be drooling clam chowder

Hey! It’s not my fault

I was taking bath salt

I thought it was just baby powder!