“KEEP THE CODE!” The neighbors who organized to fight the Harris Quarry focused on defeating the zoning code amendment that would allow location of an asphalt plant in rangeland zones. They painted a potential horror story of asphalt plants, oil and gas drilling rigs and fracking popping up anywhere in the vast stretches of the county, including parts of the coast, that are similarly zoned. The eco-red alert inspired a flood of emails urging the Supes to save our coast and protect our rolling hills and oak woodlands from despoilation. But the alarm was misplaced. The code amendment only allows an asphalt plant in rangeland if it is co-located with a rock quarry. And not allowed at all in the coastal zone where a full environmental review (CEQA) and a use permit would still be required.

THERE ARE ONLY TEN or so quarries in Mendocino County, most of them too small to justify the expense of adding an asphalt plant, not to mention the cost to small business of navigating the regulatory process. Northern Aggregates, the owners of Harris Quarry, are said to have spent $2 million dollars over the last eight years to get as far into the permitting process as they have. By overstating the threat posed by the zoning change, Keep The Code probably undermined their best arguments, which related to visual impacts, traffic, noise, nearby fault zones, water and nighttime lighting.

THE RIDGEWOOD RANCH COMMUNITY, downwind of the quarry, joined Keep The Code in opposition. Ridgewood, owned by the Golden Rule Church Association was started years ago by a group of people who figured out that if they called themselves a church they could avoid paying a lot of the taxes that you and I pay, and who can fault them for that? The Ridgewood Ranch folks likely will not be able to see, hear or smell the asphalt plant which is on the other side of a heavily forested hill from them. Very few of the Keep The Code folks will see the asphalt plant from their homes, the nearest of which is a mile away, but they will all see it for about 30 seconds when they drive east to get to Highway 101 at the decaying strip development that runs north from the intersection of Black Bart Drive and Highway 101. The biggest impact may be the proposed nighttime operations of up to 100 nights a year, which will lend industrial scale glare to the view of the night sky.

KEEP THE CODE and the Ridgewood Ranchers were taken by surprise by the 5-0 vote of the Board, with their own Supervisor Hamburg making the motion to certify the EIR and approve the zoning code amendment and rezone. The Planning Commission took the same action on a 7-0 vote. The project will now go back to the Planning Commission for consideration of a use permit for the project itself. But given the previous 7-0 vote, the writing is on the wall. This deal is done.

THE PLANNING COMMISSION has a history of working to achieve consensus, so a unanimous vote there is not such a surprise. The Supes, however, have for many years been models of contention. But this Board, with the exception of Smith who seems to suffer, as they say, “mental health issues,” functions pretty well, giving all issues a fair and thorough hearing.

THE BELOW Memo of the Week is a case in point, with Hamburg, Mendolib's herd bull, and McCowen, the “urban” Supervisor who primarily represents Ukiah, teaming up on a letter of support for a grant by the City of Fort Bragg to provide services to the homeless mentally ill. Hamburg and McCowen also recently collaborated on a letter of support for permanent protection of the Stornetta Public Lands near Point Arena, and have been working on the Broadband and Foreclosure issues. Supervisor Carre Brown has been working with Hamburg on local food security, and Brown frequently co-sponsors feel good Proclamations with Smith and McCowen. It is a far cry from the recent past where the two coastal Supes, Colfax and Smith, and their inland counterparts were more likely to be engaged in mutual attempts to sabotage the efforts of their colleagues. Having established a basic collegiality that previously didn't exist, the Board, for the first time in years, is working in the true interests of Mendocino County. In January, Kendall Smith will be replaced by Fort Bragg Councilmember Dan Gjerde, an honest and hard working young guy who will only strengthen the Board.

Memo Of the Week

We wish to go on record in strong support of the proposed Homeless Mental Health Intervention Program. We write in our individual capacities as County Supervisors, but also as the current (Supervisor Hamburg) and immediate past (Supervisor McCowen) Board of Supervisors representatives to the Mendocino County Mental Health Board. In addition, we have closely followed issues related to the provision of mental health services prior to our tenures on the Board.

Even before the economic downturn of the past several years, Mendocino County struggled to deliver appropriate mental health services to those in need or to connect them with community-based resources. Problems with service delivery are exacerbated in rural communities like Fort Bragg where fewer services are available, services are less centrally located, and hours and/or days of availability of services are limited.

Individuals who are mentally ill and homeless are at an even greater disadvantage in attempting to access services. Homeless people usually lack the basic transportation and communication resources necessary to connect with services and the structured living environment and/or peer support that would be conducive to successfully accessing and utilizing available services. Mentally ill homeless individuals may also have substance abuse problems which impede accurate diagnosis and treatment.

For the reasons stated above, the Homeless Mental Health Intervention Program is critically needed to provide the screening, outreach, advocacy and case management essential to connect the homeless mentally ill with case appropriate services and improve the chances for successful utilization of those services.

We anticipate that the Homeless Mental Health Intervention Program will successfully assist individuals with seemingly intractable problems that burden the community and too often result in hospitalization and incarceration. Effective treatment for these individuals will greatly improve their personal outcomes and free up resources to better address other pressing community needs.

Please contact us if we may be of any further assistance.

STATE SENATOR NOREEN EVANS, who routinely complains about her low pay of $95,291, not including generous retirement, per diem, car allowance and other benefits that the 99% only dream of, has admitted to taking tens of thousands of dollars annually for doing legal work on the side for two Santa Rosa law firms. Evans says she has maintained a part-time law practice since 1982, but since being elected to office she has only reported her outside income for the last two years. The Fair Political Practices Commission recently notified Evans that she needed to refile her 2010 and 2011 disclosure forms to accurately report that the income she received was from a law firm that she owns, and not one where she was merely an employee. Evans will also be required to report more detailed financial information than if she were merely an employee, including how much the business is worth and how much income she received from it, as well as each individual source of income worth more than $10,000. Evans had previously reported her law practice income as a range of from $20k to $200k, the better to conceal the actual details.

JUBILATION over passage of the sales tax increase to save the CV Starr Center was still fresh when the City of Fort Bragg hard balled the Mendocino Coast Recreation and Park District into revising the tax sharing agreement that they previously agreed to. The original agreement said the City was entitled to 45 percent of the district's property tax revenue or the amount of the district's property tax revenue generated within the City of Fort Bragg, whichever is less. The City demanded that be changed to a straight 45% of the district's revenue. The original language was provided by the City's legal counsel, but after the election the City Council insisted they had told the voters they would be getting 45% of the district's tax revenue. The amendment passed the Park District Board on a 3-2 vote, with the minority complaining that the change violated a provision of the agreement that the transfer of the property tax revenue "will not impede the ability [of the Park District] to provide existing services." The minority also objected that the City does not need to spend the 45% on the Starr Center, but can use it for any other city recreation programs. 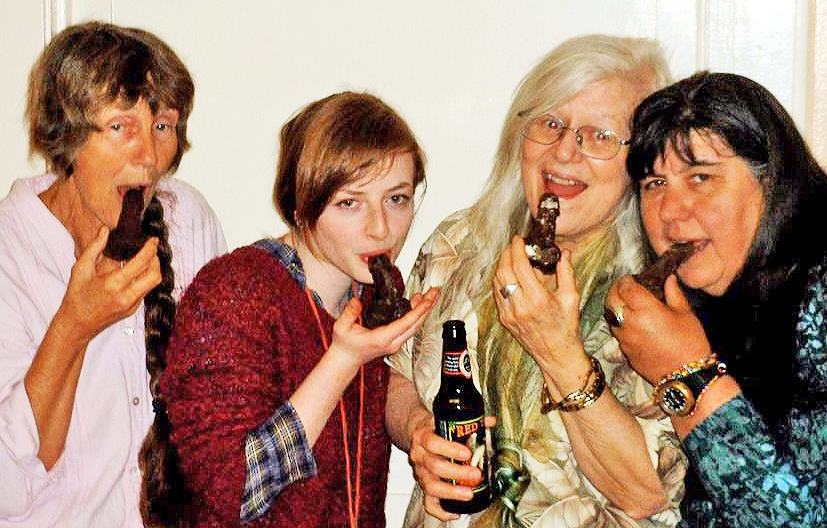 THE LADIES Of The Mendocino Environment Center Present —

How much Chutzpah does it take

Not to mention stupid, for chrissake

To stand right up and pose

With a chocolate covered “hose”

Were they doobies? No! It really is a penis bake!