A STORY in Sunday's Chron asks, “How do you tell if someone is too stoned to drive? States that allow medical marijuana have grappled with determining impairment levels for years. And voters in Colorado and Washington state will decide this fall whether to legalize the drug for recreational use, bringing a new urgency to the issue. ‘The explosion of medical marijuana patients has led to a lot of drivers sticking the (marijuana) card in law enforcement's face, saying, “You can't do anything to me, I'm legal”,’ said Sean McAllister, a lawyer who defends people charged with driving under the influence of marijuana.’ Driving while impaired by any drug is illegal in all states. Authorities want a legal threshold for pot that would be comparable to the blood-alcohol standard used to determine drunken driving. But unlike alcohol, marijuana stays in the blood long after the high wears off a few hours after use, and there is no quick test to determine someone's level of impairment — not that scientists haven't been working on it.” And there's this assertion: “One recent review of several studies of pot smoking and car accidents suggested that driving after smoking marijuana might almost double the risk of being in a serious or fatal crash.” But a reader immediately wrote in to say, “I've read several thousand accident reports in my career as a road safety inspector (from 1983-2003), so I consider myself somewhat informed when it comes to statistics about DUIs (when accidents are involved). Alcohol was responsible for approximately 90% of all DUI related accidents, next was prescription drugs, and then meth. Marijuana use, as far as DUIs were concerned, was less than 2%. And by the way, in that period of time, I've never read a report about a vehicle fatality caused by someone high on pot. In other words, this article is pure BS.” 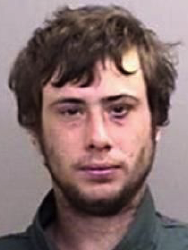 FROM THE MENDOCINO COUNTY Sheriff’s Office: “On 3-17-2012 [Saturday] at approximately 2302 [11pm] the Mendocino County Sheriff’s Dispatch Center received information that an unknown type of assault had taken place in or near an address on East Hill Road in Willits. Deputies responded to the location and learned some type of physical assault had taken place at the location between the suspect (who was caretaking for the victim) and his grandfather (the victim). Deputies learned from family members that the victim was missing from the location and they could not find him. Deputies then started looking for the victim and eventually located him deceased, downhill, off the side of Mariposa Creek Road. Mendocino County Sheriff’s Detectives, with the assistance of District Attorney Inspectors, are continuing the investigation into the death of Richard Mel Wilkinson. Suspect Kenneth Wilkinson was arrested and booked into the Mendocino County Jail for a charge of First Degree Murder. His bail is currently set at $500,000. A forensic autopsy will be conducted sometime in the coming days. Anyone with information regarding this incident is encouraged to contact the Mendocino County Sheriff’s Office at 707-463-4086.”

FRANKLIN GRAHAM WRITES: “I am informed that only invited speakers may address the Jared Huffman [Park & Wildlife] committee on March 20, Park Advocacy Day. Public comments are limited to 30 seconds, as if that is an adequate measure of what they have to speak to. However, I have sent the attached to a number of members on the Water, Parks and Recreation Committee, hoping to get it into the record.”

Attached: “Leadership and Initiative: Franklin C. Graham (Park Closures Study Group-Mendocino County) — We ask that you think seriously about your responsibility to the State Park System. The Governor proposes a $137 billion budget, of which the general fund contribution to parks will be reduced to $99 million by 2013. Why is that? State Parks return far more economic value to the state and to local economies than they cost. Every study and analysis proves this. Unlike most other state divisions, the park system is a foundation of revenue generation, not a drain on precious tax dollars. Are you seriously telling California taxpayers that you will support over $12 billion to lock people up but are unwilling to commit $122 million to support parks that 70 million visitors a year rely upon to find rest and relaxation and the restoration of their very souls? We ask you to think about the history of state park operations. This nation and this state have gone through two world wars, a great depression, and at least half-a-dozen recessions. During the Great Depression alone, rather than close parks our leaders built up the parks. Not one park was closed during any of the previous crises mentioned here, not even during the Great Depression. We ask you to think of the consequences of allowing 2012 to be the first time in the history of the park system that leadership fails us. We have counted on our elected leadership to protect and preserve the park system, not piecemeal but as an integrated whole. No matter how difficult the times, parks have always been a precious benefit to every person who visits them. Would we now, because of a short term budgetary expedient, break this covenant? We ask you to step back from an ill-conceived process that closes some parks in order to spare others. We ask you to reject secret committees which devise secret criteria upon which to choose which parks to abandon. It is unacceptable to sacrifice any public park for the benefit of for-profit operators. In January, Senator Noreen Evans was on point. She stated: “This does not pass the smell test.” And yet The March 2nd Legislative Analyst Office report recommends to transfer some parks to the privatization movement. The report does list other options. But on balance abandonment is the outcome. Throughout the 1970s, general funds made up 90% of the parks budget. By 2010 it had fallen to less than 29%. The taxpayer supported portion of the park budget continues to shrink. Such a trend leads to one outcome: the abandonment of state parks to for-profit entities. This becomes inevitable. We ask you to think seriously about your responsibility. Show real leadership by saying to the Governor and his budget: it is time to show support for parks and not to abandon them.”

JUG HANDLE SPARED. Or its execution stayed for a year, depending on your relative optimism. $19,000 gathered by Alden Olmsted of Cotati will keep the state park open for another year. Jug Handle is located between Mendocino and Fort Bragg off Highway One. It was established by the late John D. Olmsted, Alden Olmsted's father. The California State Parks Foundation, a nonprofit campaigning to keep state parks open, put up about half the $19,000. The money will fund trash removal, and restroom and trail maintenance. Jug Handle was one of 70 state parks to be closed July 1 in a $22 million state budget-cutting move. It is now among 11 parks that have been saved by donations or other funding arrangements. In 1972, Olmsted's father fought the establishment of a motel on Jug Handle Bluff, which led to the property becoming part of the state reserve system. 59 more parks are scheduled to be closed with locally-based movements underway to keep 23 of them open, including Hendy Woods State Park near Philo.

QUOTE OF THE DAY: At least Bank of America got its name right. The ultimate Too Big to Fail bank really is America, a hypergluttonous ward of the state whose limitless fraud and criminal conspiracies we'll all be paying for until the end of time. Did you hear about the plot to rig global interest rates? The $137 million fine for bilking needy schools and cities? The ingenious plan to suck multiple fees out of the unemployment checks of jobless workers? Take your eyes off them for 10 seconds and guaranteed, they'll be into some shit again: This bank is like the world's worst-behaved teenager, taking your car and running over kittens and fire hydrants on the way to Vegas for the weekend, maxing out your credit cards in the three days you spend at your aunt's funeral. They're out of control, yet they'll never do time or go out of business, because the government remains creepily committed to their survival, like overindulgent parents who refuse to believe their 40-year-old live-at-home son could possibly be responsible for those dead hookers in the backyard. It's been four years since the government, in the name of preventing a depression, saved this megabank from ruin by pumping $45 billion of taxpayer money into its arm. Since then, the Obama administration has looked the other way as the bank committed an astonishing variety of crimes — some elaborate and brilliant in their conception, some so crude that they'd be beneath your average street thug. Bank of America has systematically ripped off almost everyone with whom it has a significant business relationship, cheating investors, insurers, depositors, homeowners, shareholders, pensioners and taxpayers. It brought tens of thousands of Americans to foreclosure court using bogus, “robo-signed” evidence — a type of mass perjury that it helped pioneer. It hawked worthless mortgages to dozens of unions and state pension funds, draining them of hundreds of millions in value. And when it wasn't ripping off workers and pensioners, it was helping to push insurance giants like AMBAC into bankruptcy by fraudulently inducing them to spend hundreds of millions insuring those same worthless mortgages. — Matt Taibbi, Rolling Stone Magazine

While their execs are thought of as shrewd.

The cash they compile

Leaves the rest of us totally screwed